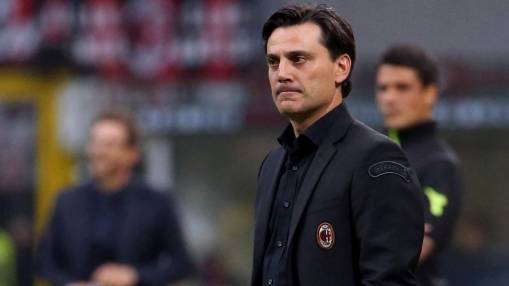 Vincenzo Montella remains optimistic, but contends that Milan deserved more from their 3-2 derby defeat to Inter.

AC Milan general manager Marco Fassone has said the club may need to sell "one or two top players" if they fail to qualify for the Champions League.

Milan have been beaten in their last three Serie A fixtures to lose ground on the top four -- their declared objective for the season -- with the pressure on coach Vincenzo Montella increasing.

Reports have suggested that the club are sounding out potential candidates to replace him, but Fassone stressed that he had their full backing.

Asked whether Milan needed to qualify for the Champions League, he told La Stampa: "Let's be careful about the use of the word 'obliged' [to qualify].

"The Champions League is fundamental for our project, but if we don't qualify it won't block our plans.

"It would just postpone them by a year, and we would have to find a way of making up for the loss in revenue from the Champions League by selling one or two top players."

Fassone said Montella could not have been expected to bring overnight success after a summer of substantial spending and changes.

"We're about five or six points [behind where he had hoped Milan would be]," he added.

"The aim was to keep within a small gap of the top four for the entire first half of the season and then climb into the Champions League zone in the second half.

"Clearly there is room for improvement, but we cannot afford to get anything more wrong.

"Nobody thought that, with such a new squad, there wouldn't be any problems -- but certainly we are lagging behind compared to our expectations.

"Montella was chosen by us, and he has our full faith."

Milan face Genoa on Sunday, and Fassone said he hoped that could be the game that kick-started their season.

"There's no use getting caught up in ifs and buts -- we all need to pull in the same direction if we are to find a way out," he added.

"We're just lacking that spark, a goal which would change our direction, but I'm convinced we will get it."

Ben Gladwell reports on Serie A, the Italian national team and the Bundesliga for ESPN FC, UEFA and the Press Association. @UEFAcomBenG.