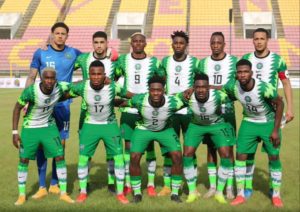 John Obuh believes Victor Osimhen and other players that withdrew from Nigeria international friendly against Cameroon will give manager Gernot Rohr an opportunity to try new players in their positions.

The Super Eagles will slug it out against the Indomitable Lions in a double-header with the first fixture expected to take place on Friday while the second outing is scheduled for June 8.

Obuh expects Rohr to take positivity from the situation and approach the encounter with determination to improve the team.

“When a situation like this arises, it will give an opportunity to a new observation. It might be a little bit difficult for the coach because he wanted all of them to play together,” Obuh told Goal.

“Since his desire to see the players play together for more improvement did not materialize because of injuries, he will gain by having an opportunity to see new players in the same positions. So he won’t lose in both ways and that is how football supposed to be.

“Cameroon is a big country and a good team to play for friendlies and I am sure playing Cameroon will help the Super Eagles even in this situation.

“In all the areas the Super Eagles have tried their best during the Africa Cup of Nations qualifiers but they still have room for improvement, so they must not relax.

“Nigeria will always have something to gain and learn from playing Cameroon even if we play them 10 times.”

After taking on Cameroon, the Super Eagles will square off against Mexico in another friendly on July 4.

The three-time African champions will then face Liberia and Cape Verde Islands in World Cup qualifiers in August and September, respectively.

Nigeria have already sealed their place in the Africa Cup of Nations in Cameroon after finishing top of the Group L table.

Obuh was a former coach of Nigeria U17 and U20 teams and also previously managed Nigeria Professional Football League sides Kwara United, Enugu Rangers and Niger Tornadoes, among others.