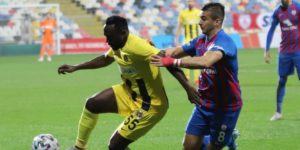 Simon Zenke has told SCORENigeria that on the advice of doctors he cut back on his somersault goal celebrations as he marked his return to Turkey in super style.

Less than 72 hours after returning to same ground he had a goal feast some years ago, the former Nancy striker was painting his return with a great effort after finishing a fine run with a delightful tee off in the 83rd minute to see secure a valuable 4-2 win at Altinordu.

The 32-year-old star was thrown into the deep end in the 58th minute as he launched his revival bid after enduring a tough patch in non-league football in France and didn’t disappoint his new side as he promised during his signing.

He would celebrate his hard earned effort with his cartwheel celebration, which he would only limit to two somersaults because of the doctor’s advice.

“God has done it again for me and I’m happy to be back in goal scoring business,” Zenke told ScoreNigeria.

“It was a great comeback and I hope I will improve on this with efforts at goal in subsequent games.

“I had to limit my trademark somersaults to only two because doctors advised against my usual multiple cartwheels.

“The doctor advised it could affect my shoulders and I think I’m okay with just one or two.”

Zenke was top scorer in the Turkish second-tier for Samsunspor in 2011, when his 16 goals also ensured a championship medal round his neck and instant promotion to top-flight football.