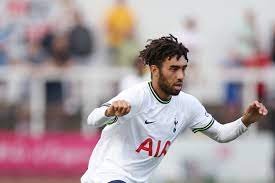 Cardiff City has confirmed the signing of Nigeria-eligible striker Kion Etete from Premier League club Tottenham Hotspur on a permanent deal valid for three years. Etete had entered the last year of his contract at Tottenham which prompted the permanent sale for an undisclosed fee.

A loan spell with League Two side Northampton Town during the first half of last season saw the physical striker appear in 23 games before a season-ending move to League One side Cheltenham Town saw him score three goals and provide three assists in thirteen outings.

In his post-signing interview, the 20-year-old said, "It feels good to finally be here. The manager went into a lot of detail about the plan for the season, and how they want me to play. It's my job to try and fulfill that. When the players know what the gaffer wants from them, it's easier to put it into motion on the pitch.

"Obviously having gone from League Two to League One, the Championship is the next one. I just can't wait to get started, get used to the level, and hopefully excel.

"I'll always work hard for the team and the Club. Winning is the number one priority at the end of the day, and I'll do as much as I can to fulfill that".

Etete, who arrived at Spurs from Notts County in the summer of 2019, is on the radar of the Nigeria Football Federation ahead of a potential invitation to one of the national teams.

The Derby-born attacker will wear the number 9 jersey in his first season at the Bluebirds.