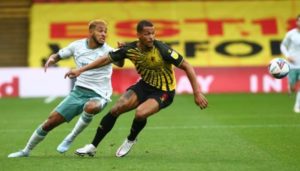 Super Eagles defender William Troost-Ekong is happy with his performance for Watford against Bournemouth but disappointed they didn’t pick all the three points at stake.

The center-back missed Watford midweek win over Brentford, but returned for last weekend’s draw against the Cherries and was voted Man of the match.

The Hornets played out a frustrating 1-1 draw with their visitors and Troost-Ekong told Hive Live Extra they are disappointed not to get a win.

“We are a little bit disappointed to only get a point, but if you’d have said before the game we’d get a point, we’d have probably taken it,” he said.

“Of course it’s disappointing when you concede so late in the game and it felt a bit like a loss, but if you look back at the game, without a biased view, they had the ball a lot so a draw was probably a fair result.

“We should have perhaps tried to defend a bit higher, especially in the second half, but it’s quite difficult as we didn’t have the right pressure on the ball. They tried to play behind us quite a lot, so they pinned us back a bit with the ball in behind. They moved the ball well and as soon as we tried to get up the pitch, they tried to get behind us. They had quick players, so we had to cover the space.” he said

Troost-Ekong and his teammates will next face newly-promoted side Wycombe Wanderers on Tuesday.