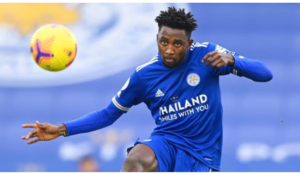 The reason for Nigeria midfield maestro, Wilfred Ndidi's absence against Brighton Albion on Saturday has been revealed.

Leicester City Coach, Brendan Rogers has disclosed that the Super Eagles player has suffered a muscle strain will be out for a couple of weeks.

Owynn Palmer-Atkin, a Leicester City correspondent for the BBC made known the news via his Twitter account.

Ndidi has missed a minimum of six weeks after picking up a groin injury versus Burnley in September before he return.

He has also missed action in March which was reported to rule him out for the rest of the season due to knee injury.

He is now set to miss the FA Cup fourth round match against Walsall and the English Premier League game against Aston Villa.