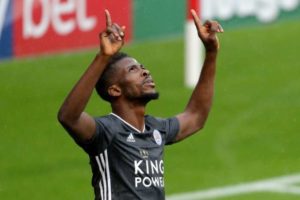 Iheanacho, who had a stellar pre-season with the Foxes, scoring three goals, is yet to make an appearance this season.

The Nigeria international, regarded as Jamie Vardy’s back-up, missed out on the Foxes match-day squads in the last two games after being an unused substitute for the first two league games.

“We try and balance the bench the best we can. Kel has been working well in training, there are no issues at all.

“It’s just a case of recently, we have had Demarai Gray on the bench instead of Kel.

“He (Gray) is a multi-functional attacking player who can play out wide and up front.

“We also have Ayoze (Perez) who can play up front, so we just felt the balance that we have, it was better to stick with what we did on the weekend.”

Iheanacho is one of the 24 players called-up by Gernot Rohr for next Tuesday’s international friendly against Ukraine.