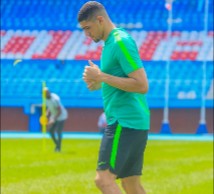 Brighton and Hove Albion’s last eleven matches in all competitions have been devoid of the appearance of Nigeria international Leon Balogun.

The 31-year-old has fallen down the pecking order and as a result of that, regular play time has become a rarity for the central defender.

Every footballer’s aspiration is to play the beautiful game every time and satisfy the wishes of the coach.

A move away from the Premier League club is imperative at this point. This will ensure that he becomes a top player once again.

Albeit, Super Eagles gaffer Gernot Rohr’s policy of inviting players who are featuring for their clubs has put him in a vulnerable position to stop playing for the national team.

The frequent performances by Udinese’s William Troost-Ekong, West Brom’s Semi Ajayi and Leganes’ Kenneth Omeruo has made the starting line-up to be quite competitive.

He hasn’t been given the opportunity to showcase and improve his talent. Therefore, seeking for greener pastures is a very good idea for Leon Balogun.

It is alarming that he hasn’t even played a Premier League game for Brighton this season. There are multiple clubs that will be glad to have him in their squads.