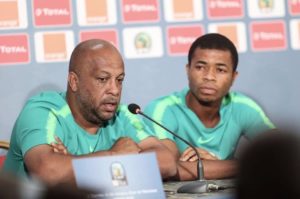 Coach of the Nigeria U20 team Paul Aigbogun says factors other than not being good enough played a role in the failure of his team to lift the recently concluded Africa U20 Cup of Nations in Niger Republic.

Nigeria finished fourth after losing 3-5 on penalties to South Africa in the third place match but qualified for the World Youth Championship in Poland as part of the four teams that will represent Africa at the tournament.

The Aigbogun led team were heavily criticised by lot of Nigerians for finishing fourth at a tournament where Nigeria hold the record of winning it seven times, more than any other African country

Explaining their failure to win the tournament, the soft spoken coach said not going to the tournament with his top two strikers affected the rhythm of his team, and also some of the foreign based players he invited ‎were not released by their teams as the tournament is not contained in the FIFA calendar.

” As a coach, i wanted to win the nations cup. We got all the support needed from the NFF to excel at this level but we lost two key attackers, Wasiu Alalade to administrative issues and Victor Boniface to injury on the eve of the competition.

“These are important members of the team. Alalade was our highest goal scorer in the qualifiers while Boniface was key to our early success. Unfortunately, we had to travel without these two and it really affected the team.

“Reading most of the comments after the game has given us the confidence that we can do better in Poland. We plan to invite more young players to the team when we resume camp in March”, he was quoted as saying by Wale Ajayi.

“Akila Jesse of Plateau united is not new to us. We gave him his chance before but he didnt impress. Others like Samuel Nnochiri of Heartland and Lawal Abayomi of MFM FC will get their chance in March.

“We hope to invite players based in Nigeria or outside that have what it takes to improve our team. I am calling on sports journalists, administrators and football fans to make recommendations that will be useful to the team. Every good player will get a chance to prove himself”