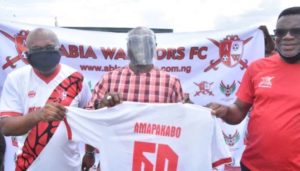 Coach Imama Amapakabo has confirmed that he received offers from other Nigeria professional football league clubs before joining Abia Warriors.

Imama Amapakabo’s appointment as the new head coach of the team was confirmed last weekend after signing two years contract with Umuahia based team.

Speaking with newsmen shortly after he was presented to the media on Thursday, the former Super Eagles assistant coach said he opted to join the club because he wants to be closer to his family in Port Harcourt.

“If I follow the calls I received, I won’t be with Abia Warriors, but I’m principled, I went to Maiduguri when every thought it wasn’t possible.”, he told brila.net.

Port Harcourt to Umuahia is about an hour drive, I just want to be closer to home and after discussion with the board of Abia Warriors, I was convinced because they are ambitious,” he said.

The former Sharks of Port Harcourt goalkeeper has now pleaded with the Abia people to get behind the team ahead of next season.

“Given the support from Abia people, I think all our dreams can be achieved, I did it with Rangers and I can repeat the success here as well,” he said.