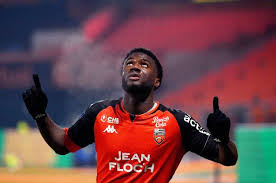 Sky Sport reported on Monday afternoon that the 23-year-old has caught the eye of the English Premier League Club and the London side are ready to buy their target this January transfer.

Although it was reported that French side Lorient have set an asking price of £25m for the player,but it is yet to be seen what their reaction will be to the offer.

Moffi has been impressive for Lorient scoring 12 goals in 18 matches and has helped their European football ambition.

The former Kortrijk player scored over the weekend  against Marseille, but was able to stop his side's 3-1 loss in the league match.

OGC Nice are in the raider of the Nigerian with Southampton's bid earlier rejected by the Lorient.