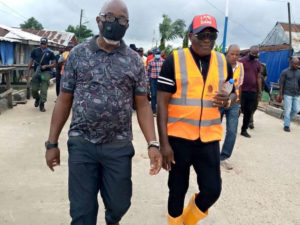 Sports facility Expert, Ebi Egbe, has promised that his company would deliver the best ever FIFA Goal Project in Ugborodo-Escravos in Warri South Local Government Area of Delta State.

Egbe who is the Chief Executive Officer of Monimichelle, the unarguably best football playing pitch contractors in the country at the moment, accompanied NFF President., Amaju Melvin Pinnick, on a visit to the community early this week.

He promised that the location of the project was fantastic as it would be nice to see football being played close to the Atlantic ocean.

“We are going to deliver the best ever FIFA Goal Project. It will be the first of it’s kind amongst the riverine communities in the Niger Delta,” pledged Egbe.

Earlier during the visit, Pinnick had solicited the cooperation of the host community for the project to be built for the teeming youths of the area o benefit.

Pinnick intimated the Paramount Ruler of Ugborodo that world soccer governing body, FIFA has given approval for work to commence on the project in the community.

The former CAF Vice President called on the host community to create a conducive environment for the contractor to deliver the project on time.

On his part, the Paramount Ruler of Ugborodo community who spoke through the chairman of the interim community committee thanked FIFA and the NFF for the rare privilege and assured them that all necessary support will be provided for the actualisation of the project.