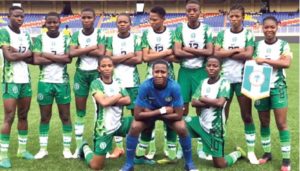 The U-17 Women’s National Team of Nigeria, Flamingos, will be looking to defeat the Stars and Stripes of the United States when the two sides meet at the quarterfinals of the FIFA U-17 Women’s World Cup in India today, Friday.

The Flamingos reached the quarterfinal stage for only the fourth time in their history after finishing as runners-up in Group B.

The Bankole Olowokoore-tutored girls defeated New Zealand and Chile and lost to Germany to amass six points from three games.

Even stiffer competition is expected against the United States.

The Stars and Stripes won Group A with seven points after winning two, drawing one, and losing none of their games.

A 1-1 draw with Brazil was sandwiched between comprehensive 8-0 and 4-0 victories against India and Morocco, respectively.

Despite the storied adventure of both teams at the Mundial, this is the first time Nigeria will face the United States at this level.