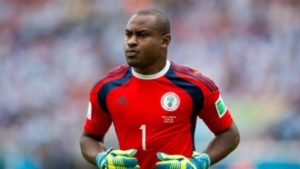 Former Super Eagles goalkeeper Vincent Enyeama has been named in International Federation of Football History and Statistics’ (IFFHS) African team of the decade following his outstanding performances with the Nigeria national team.

IFFHS revealed the African team of the decade with players who performed from 2011 to 2020.

IFFHS x-rayed the performances and impact of the individual player at the club level and the national team level.

It also put into consideration statistics of their performance as yardstick to be selected.

At the 2013 Africa Cup of Nations, Enyeama deputised for regular captain Joseph Yobo, who stayed on the bench for most of the competition.

On 10 February, Enyeama led Nigeria to its third continental victory, keeping a clean sheet in a 1–0 defeat of Burkina Faso in the 2013 Africa Cup of Nations Final.

He made his second FIFA World Cup appearance in the 2010 tournament in South Africa. He was named man of the match in Nigeria's first game of the tournament, a defiant display that restricted Argentina to a 1–0 win.

Enyeama, who was playing his 56th international for the Super Eagles, made six fine saves against the two-time world champions, four of them from Lionel Messi.

The Ex Lille goalkeeper made 100 caps for the super Eagles before retiring.

See below the African decade XI: