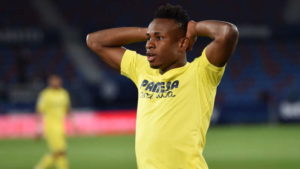 The 22-year-old Nigeria international has been out of action since picking an injury during the Yellow Submarine’s Europa League semi-final clash against Arsenal which ended 0-0 at the Emirates Stadium on May 6.

The injury saw the Super Eagle miss Villarreal’s Europa League final victory over Manchester United at the Stadion Gdansk in Poland, and also the team’s Super Cup defeat to Chelsea in August.

He underwent successful surgery on May 31 at Hospital Quironsalud in Barcelona but despite reports indicating he had resumed training with the team, Emery has provided an update that has ruled him out of the team’s opening match in the Champions League against Atalanta BC.

“He’s going a little bit slower than we wanted to and we still want to go cautiously with him,” the former Arsenal manager said as quoted by the club’s official website ahead of the clash at Estadio de la Ceramica on Tuesday night.

The news will be a huge concern to Nigeria, who already missed Chukwueze’s services when they played their opening two matches in the 2022 Fifa World Cup qualifying matches.

The Super Eagles opened their campaign to reach Qatar with a 2-0 win against Liberia at Teslim Balogun Stadium and then traveled to Cape Verde, where they came from a goal down to sink the hosts 2-1 at Stadium Aderito Sena.

Chukwueze made his debut for the Nigeria senior team on November 20, 2018, as a starter in a 0-0 friendly draw against Uganda.

In May 2019, Chukwueze was invited to represent Nigeria’s senior team at the Africa Cup of Nations and the U20 team at the U20 World Cup. However, Villarreal said he could only play in one of the tournaments.

He ultimately decided to take part with Nigerian’s senior squad for the Africa Cup of Nations hosted in Egypt and scored his first senior goal in Nigeria’s 2-1 win over South Africa in the quarter-finals.