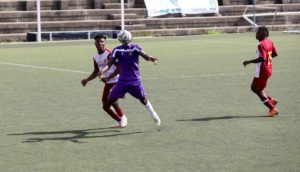 For so long a time we've seen and played with European teams and players in soccer video games but local Clubs and players don't get the recognition despite the large numbers of locals playing these games.

Its been all about the European clubs, players and this got a sports fan and computer coder, Nigerian Victor Daniyan frustrated.

Victor Daniyan became adept at soccer video games at university, but still not satisfied with things as the stars and strips of his native country are not been recognised.

Three years of tinkering and hundreds of lines of code later he remedied that omission, launching what he believes is the first African soccer game - Vikseen Virtual.

The game as reported by Reuters is a modified version of Japanese game-maker Konami's copyright-free blockbuster simulation Pro Evolution Soccer, and features 50 clubs and more than 1,400 players from Nigeria's top leagues.

Though Daniyan's modification has only been downloaded a few dozen times since he launched it in May, it's already won plaudits on the pitch and on the sofa.

Speaking on the game on this sidelines during one of their training session in Lagos is Owner of Ikorodu City and a player of the club.

Harrison Austin, playing for Ikorodu City FC a in the Nigeria National League said having his own digital avatar could boost his chances of being scouted.

Adding his voice to the discussion is a Lagos gamer Udom Ukeme: "I like the game because it is my nation's game. I can see people that I know inside the game," he said as he and a friend sat on a stripy sofa in his sitting room, smashing the buttons of a video game controller."

Daniyan hopes to broaden Vikseen Virtual's appeal further by introducing teams from across the continent, and including African music and commentators.