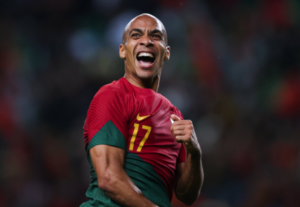 Benfica midfielder, Joao Mario, has described Portugal’s 4-0 win over the Super Eagles of Nigeria in Thursday’s international friendly in Lisbon as a great preparation for their 2022 World Cup campaign.

Mario was among the goals as he netted Portugal’s fourth to seal a comfortable win against the Eagles.

The Eagles had the chance to reduce the deficit when they were awarded a penalty, following a foul on debutant Bright Osayi-Samuel.

But Emmanuel Dennis saw his effort palmed against the post and out to safety by Portugal’s goalkeeper Rui Patricio.

And Mario took to his personal Twitter handle to celebrate his side’s victory as they prepare for the 2022 FIFA World Cup in Qatar.

“Great preparation game and ready for the World Cup,” he Tweeted.

Portugal will take on Black Stars of Ghana in their first game in Group H at the 2022 FIFA World Cup on November 24.