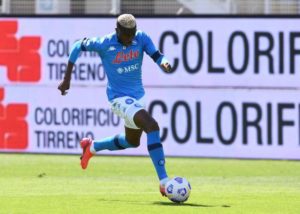 Osimhen then scored Napoli’s fourth and his second of the game with a shot from the edge of the box in the 20th minute.

The Nigeria international rounded the goalkeeper and tapped the ball into an empty net to make 5-0 in the 35th minute.

He scored his fourth of the game four minutes later.

The 22-year-old was replaced at half-time.

Napoli will intensify their preparations for the 2021-22 Serie A campaign with fixtures against Serie C club Pro Vercelli and Bundesliga champions Bayern Munich on July 24 and 31 respectively.

The Parthenopeans will begin their new season with a date against Venezia at the Stadio Diego Armando Maradona on August 21.