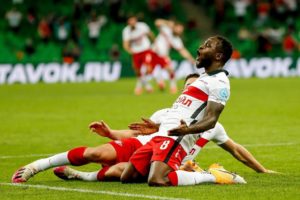 Nigerian international and Chelsea loanee grabbed his maiden goal in the Russian top-flight in his first start for Domenico Tedesco’s team.

Victor Moses has opened his goal account in the Russian Premier League with an effort in Spartak Moscow’s 3-1 victory over Krasnodar on Saturday. 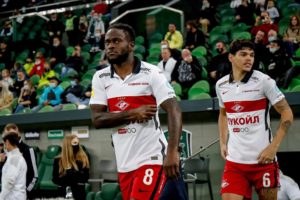 The 29-year-old doubled the visitors’ lead at the Krasnodar Stadium, 20 minutes after Ezequiel Ponce broke the deadlock in the 13th minute.

After the restart, Leon Sabua pulled a goal back for Krasnodar in the 58th minute but Jordan Larsson’s 81st-minute goal secured all three points for Domenico Tedesco’s men – their second straight win in the Russian top-flight. 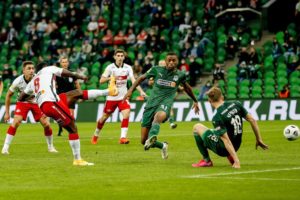 Moses saw 67 minutes of action in the encounter before he was replaced by Andrey Eshchenko. It was his second league outing for the People’s Team since he arrived from Chelsea on a season-long loan 10 days ago.

Saturday’s strike ended the Nigerian midfielder’s goal drought in a competitive match as his last goal came in August 2019 during a Turkish Super Lig match which Fenerbahce won 5-0.

Spartak Moscow climbed to the top of the Premier League standings after the win on the road with 27 points after 12 games. 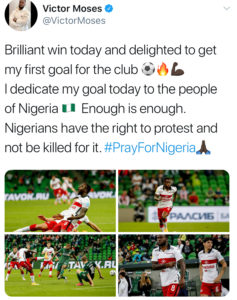 Moses will be hoping to continue his impressive start to life in Russia when Tedesco’s side host Rostov for their next league fixture on October 31.

The former Liverpool and West Ham United midfielder is currently on his fifth loan spell away from Stamford Bridge after failing to secure a place in Frank Lampard’s squad this term.