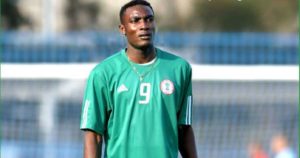 Former Super Eagles forward, Victor Agali, has finally broken his silence on the incident which sent him out of the Nigerian national team claiming that he was wrongly accused.

Victor Agali was one of the promising Nigerian forwards years back considering his superb attacking styles of football for the Super Eagles and all the teams he played for.

But things turned sour for the former Marseille star in 2004 during the African Cup of Nations which the Super Eagles failed to win in Tunisia.

Super Eagles played their first game at the 2004 Nations Cup against Morocco in which the three-time African champions lost the tie.

And after the encounter, the trio of Celestine Babayaro, Yakubu Aiyegbeni and Victor Agali were alleged to have kept women inside their hotel rooms.

They were eventually sent out of the Super Eagles camp in which these three players returned to their clubs in embarrassing fashions. 17 years after, Victor Agali claimed that himself and other three players were accused wrongly by those in charge of the Nigerian football then.

According to the report on Complete Sports citing Brila, Victor Agali explained that the NFF used the media to tarnish his image in Tunisia.

”NFF Officials lied about what happened in Tunisia, I was kicked out of the Super Eagles on false allegations. “I remember years later Taiwo Ogunjobi of blessed memory called me to apologize for what happened.

“Football officials had the press at their disposal and would often use them to put out all sorts of narratives. They didn’t care how if affected the players, as long as it’s in line with their agenda.”