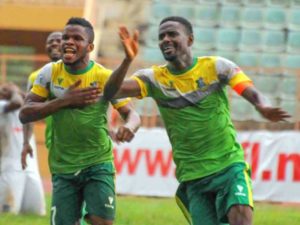 Kano Pillars captain Rabiu Ali has dismissed reports circulating in the media that he is planning to retire from football .

Ali who is the oldest outfield player in the Nigeria Professional Football League, Rabiu Ali, said in a statement on Wednesday that the reports of his retirement aren’t true and he’s committed to helping the Sai Masu Gida achieve more success.

The statement read: “This is to notify the general public and Gentlemen of the press of an unfounded publication in some media that I will quit active football by the end of the season. Such publications are UNFOUNDED and FALSE.

“I want to call on the media to disregard the information as it is baseless. I’m still active and dedicate myself to the success of my Team Kano Pillars FC.

“I want to call on our youth to always discourage the spread of FAKE NEWS.

The Kano Pillars midfielder, who is nicknamed Pele by his teeming fans will clock 40 September 27 but remain the inspirational and influential player in the Nigerian professional football league.

Ali has spent all his senior with the former Nigerian champions after making his debut in 2011.

Ali who has been capped 18 times by Nigeria will lead the club next season as they will be searching for domestic glory and CAF Confederations cup crown.