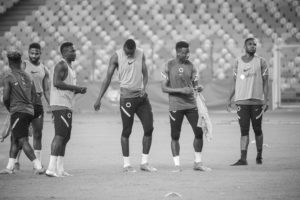 The number of players in the Super Eagles camp ahead of the two friendly games against Mexico and Ecuador has increased to 19.

According to the updates from the Super Eagles camp in the United States, the duo of Chidozie Awaziem and Francis Uzoho are the latest arrivals for the double friendly.

Uzoho wasn't on the roster of players originally invited for the two friendly games.

However, Okoye pulled out of the squad citing a shoulder injury and that led to a late invitation for Israel-based goalie Adebayo Adeleye as a replacement.

Unfortunately, Adeleye is currently battling to secure a visa to the United State of America and that perhaps may have led to Uzoho gate-crashing into the team for the Mexico and Ecuador friendlies.

Uzoho was initially reported to have asked for a break from the national team following the backlash that came with his howler in the crucial World Cup playoff clash against Ghana's Black Stars.

The goalkeeper has since denied making such a request and he has matched his action with words; showing up in the Super Eagles camp despite a seemingly late invitation.

Three-time African champions, Nigeria are set to face Mexico and Ecuador 'A' Teams in prestige friendlies as they prepare for their opening game in the qualifiers for the 2023 Africa Cup of Nations

The Eagles will battle the El Tri at the AT & T Stadium in Dallas, the State of Texas on Saturday, 28th May before flying to New Jersey to confront Ecuador at the Red Bull Arena in Harrison on Thursday, 2nd June.