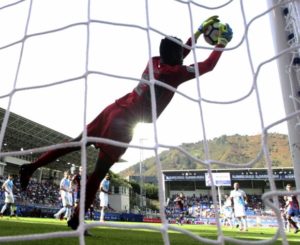 Despite conceding a goal on his debut for his Spanish Segunda division side, Elche, Francis Uzoho is delighted to have featured in Thursday’s Copa Del Rey win over Granada.

The Nigeria goalkeeper conceded a goal with nine minutes left in the encounter after Jonathan Niguez and Pablo Vazquez had scored for Elche.

Uzoho joined Elche from Deportivo La Coruna after the Spanish club were relegated from the top tier division of the Spanish league.

“Great night, great debut, on to the next round #CopaDelRey,” Uzoho wrote beneath a picture he posted on Instagram on Friday.

The 19-year-old goalkeeper will be looking forward to recording his first clean sheet this Sunday when Elche hosts RCD Mallorca in a Spanish Segunda clash.

To keep up with Uzoho as they fight for a a promotion back to the top league, you can watch La Liga live online with a VPN.