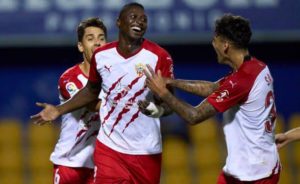 Nigeria International Sadiq Umar and his Almeria side have been handed a very difficult Laliga opener, as they begin their season with a home fixture against European and Spanish champions Real Madrid.

The Rojiblancos return to the Spanish top-flight after a seven-year absence, but they face a difficult welcome against the champions

Umar scored for Almeria in their 2-2 draw against Leganes in the final game of last season. And the result was enough to land the Rojiblancos the Segunda Liga trophy and automatic promotion to the Laliga after a seven-year wait.

However, the new boys will not have an easy welcome.

their opening game of the season at Estadio de Los Juegos Mediterráneos on August 14.

Umar has a tough battle in his hands, as he could go up against the likes of Antonio Rudiger, David Alaba, or Eder Militao.

However, he would look to draw inspiration from his performances in the last two seasons and power his side to victory.