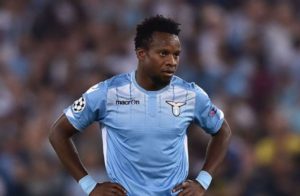 Super Eagles star Abdullahi Shehu featured in every single minute, but his best efforts failed to help Omonia Nicosia avoid a 2-0 defeat away to Dinamo Zagreb in the qualifying rounds of the UEFA Champions League.

Deployed in his preferred defensive midfield role, Shehu was instrumental to the Cypriot champions keeping a clean sheet in the first half of the encounter inside the magnificent Stadion Maksimir in Zagreb.

Out-of-favour Super Eagles midfield dynamo Onazi Ogenyi suffered a similar fate in Budapest as his Zalgiris Vilnius side fell to a 2-0 away defeat to Ferencvaros.

But the damage had already been done by the time the 28-year-old left the field of the Groupama Aréna as first-half goals from Myrto Uzuni and Tokmac Nguen had handed the victory to the home side.

The second leg of both encounters will be played next week.