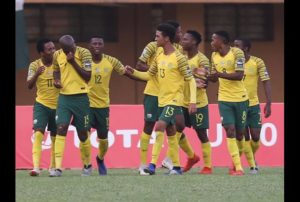 South Africa U-20 coach Thabo Senong has demanded total concentration from his players in today’s (Tuesday) clash against the Flying Eagles of Nigeria.

South Africa played out a 1-1 draw with hosts Niger in their opening Group A match on Saturday coming behind to earn a share of the spoils.

The Flying Eagles on the other hand, beat Burundi 2-0 to go top of the standings.

“The truth of the matter is we are in a tough group. Every side that is participating in this tournament would like to see themselves surviving their group by finishing in the top two,” Senong told reporters on Monday.

“Sides like Nigeria had a strong start. They beat Burundi convincingly without conceding a single goal. We play them tomorrow and I believe that we need to be switched on mentally if we are to come out with a positive result at the end of fulltime.

“It is going to be a tactical match because both sides have got a good technical staff with players who are also good on the ball. A team that makes more mistakes is this encounter is the one that is going to lose in this upcoming matchup. We just need to make sure we minimize the possibility of such occurring on our side, and we will be just fine.”