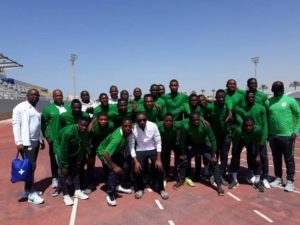 Nigeria’s Flying Eagles will face the Amajita of South in Saturday’s third-place match of the Total U-20 Africa Cup of Nations in Niger.

The two sides will aim to finish on a high after losing their semifinal matches to Mali and Senegal respectively.

The Flying Eagles bowed out on penalties following 1-1 stalemate after extra time against Mali who will take on Senegal in Sunday’s final at the Stade General Seyni Kountche.

Amajita lost to Senegal 1-0 courtesy of Givemore Khupe’s own goal twenty minutes from time securing Les Lionceaux a place in the final against Mali.

The two teams will be meeting for the second time in Niamey after canceling out each other 0-0 in the group stage of the tournament.

Amajita’s coach Thabo Senong is at his third successive Africa U-20 Cup of Nations tournament.

He failed to go past the group stages in Senegal four years ago then finishing fourth in the last edition in 2017 in Zambia and qualifying for the World Cup in South Korea.

Nigeria is the most successful team in the history of the tournament with seven titles but failed to defend the title they won in 2015 in Senegal when they didn’t qualify for Zambia.

“Playing against Nigeria is another opportunity for us to face opponents of another caliber by putting this on the account of our preparation for the world. We will do our best since we play every game to win.” Senong told journalists.

Nigeria have kept three clean sheets in the tournament whiles South Africa has two and just two goals in their four matches.

The Flying Eagles failed to score just once in the tournament which was the goalless draw against the Amajita who have been very organized in defense.