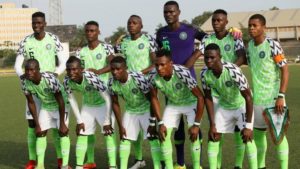 Nigeria’s Flying Eagles got off their campaign at the Africa U-20 Nations Cup in Niger  to a bright start following a 2-0 win against Burundi at the Stade Seyni Kountche on Saturday.

Paul Aigbogun ‘ s charges failed to register a goal in the first half despite a dominant display as they wasted a number of goal scoring chances.

The West Africans piled more pressure on the Burundians and were rewarded for their efforts when  Effiom scored the second 20 minutes from time.

The substitute beat off a marker and slotted the ball into the net from close range.

In the first Group A clash also on Saturday,  hosts Niger and the Amajita of South Africa battled to 1-1 draw.

Nigeria top the group with three points,  while Niger and South Africa have one point each. Burundi occupy last position with zero point.

The Flying Eagles will face South Africa in their next game on Tuesday.