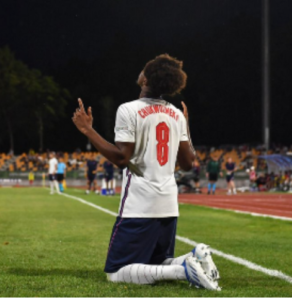 An England U20 team captained by Chelsea's summer signing Carney Chukwuemeka thrashed South Americans Chile 3-0 in an international friendly on Wednesday, with two players of Nigerian descent getting on the scoresheet for the 2017 world champions.

Former Chelsea schoolboy Malcolm Ebiowei, who was named in the Golden Eaglets provisional roster for the 2019 FIFA U17 World Cup, later came off the bench to make his debut for England U20s, replacing Edozie, while Aston Villa loanee Tim Iroegbunam was the fifth player of Nigerian descent given minutes.

Glasgow Celtic goalkeeper Tobi Oluwayemi, who was not originally included on the roster, has linked up with the squad in Spain and was a non-playing substitute against the Chileans.

After Delap opened the scoring for England, Oyegoke scored an excellent individual goal, dribbling past three players before firing an unstoppable left-footed shot into the top corner midway through the first half.

Sixteen minutes into the second half, the lively Edozie put the game to bed when he made it 3-0 with a goal from inside the area.

Of the aforementioned players of Nigerian descent, only Chukwuemeka went the distance for England.

Up next, the Young Lions will face African side Morocco on Saturday, September 24.