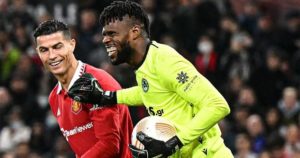 According to transfer news expert, Luca Bendoni, Francis Uzoho could be on the move to France after Reims identified him as a possible replacement for Patrick Pentz, who looks to be locked in on a transfer to MLS side, Colorado Rapids.

The 24 year-old Nigerian who contract with Omonia Nicosia ends at the end of this season has been in a good run of form for the club since his sterling performance against Manchester United in the Europa League group stage match at Old Trafford.

He won rave reviews and the man of the match award despite losing 1-0 at Old Trafford, denying Cristiano Ronaldo and co for much of the game until a last-gasp scrambled winner from Scott McTominay.

He has kept 8 clean sheets for Omonia Nicosia this season in his 15 appearances for them as they currently occupy the 5th position on the table in the Cypriot first division league with 34 points from 20 matches.