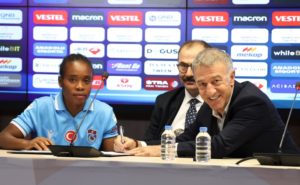 She joined the team from another Turkish side Galatasaray after spending a season with her former club.

The defender started her career in Nigeria with Abia Angels and Invincible Angels of Gboko before moving abroad.

She later moved to Ivory Coast where she spent three years where she played for Juventus de Youpongon and Lahor Essor Abidjan before moving to Turkey.

Daniels will be seeking to add fire power to the defense line of Trabzonspor AS.