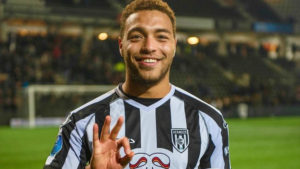 Following an impressive loan spell with Feyenoord last term, where he helped the Dutch side reach the final of the maiden edition of the Europa Conference League, scoring 10 goals to emerge the competition’s highest goalscorer

He started the 2022/23 season on a high with Genk scoring three goals in three games but has failed to impress since he joined Cremonese in the Italian topflight.

He has scored just three goals in 16 appearances for the Grigiorossi, the only club in Italy without a win so far this season, currently sitting rock-bottom in Serie A and looking destined to go down to the second division.

The 28-year-old has, however, been offered a chance to revive his poor form, with Brugge said to be interested in his signature.

“According to information from the Nieuwsblad , the leaders of Club Brugge have contacted the resident of Serie A to find out if they are open to a possible departure of their 28-year-old centre forward,” the website wrote.

The Nigerian striker’s contract lasts till 2027, as such Club Brugge may try to get him on loan, but such a move may not happen until the end of the current season due to the fact that the striker cannot turn out for a third club this term.