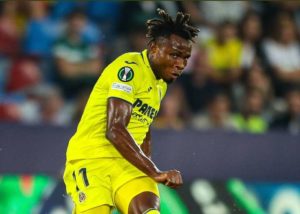 According to earlier reports in England following Aston Villa 3-1 defeat of Manchester United over the weekend, it was gathered that Unai Emery, coach of Aston Villa named Chukwueze as his target for his new club.

Chukwueze was Unai Emery's players while at Villarreal, however he wants to link up with at Aston Villa.

Latest report according to Fichajes, Unai Emery will have to compete with Arsenal who have now showed interest in the Villarreal's talisman.

The report stated that Arsenal are targeting Chukwueze as backup for Bukayo Saka.

Arsenal don’t have a lot of backup for Bukayo Saka on the right-hand side, except for the inexperienced Marquinhos. Bringing in a player of Chukwueke’s calibre, a player who has plenty of experience at the top level at a young age, could be a smart move, possibly allowing Marquinhos to be sent out on loan.

However, his lack of goals could be a concern to Mikel Arteta, who relies on players all over the pitch to contribute, with Gabriel Jesus, not a natural, goalscoring striker.