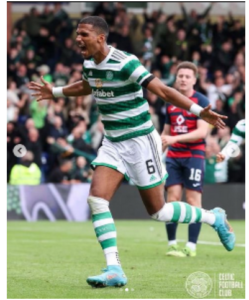 Super Eagles-eligible central defender Moritz Jenz is set to cut short his loan spell at Glasgow Celtic ahead of a possible move to his native Germany.

The Lorient-owned player was supposed to spend the entirety of the season at the Scottish Premiership champions but has struggled for game time since the conclusion of the 2022 World Cup.

The 23-year-old has not been given minutes in the last eight matches played by the Hoops and wasn't called up for three of the last four matches contested by Ange Postecoglou's team.

The signing of Yuki Kobayashi and return to fitness of Carl Starfelt has pushed the German-Nigerian further down the pecking order of central defenders at Celtic.

Italian transfer market expert Gianluca Di Marzio writes on his website that Schalke 04 are on the brink of signing Jenz on loan for the rest of the season with an option to buy included in the deal.

The Berlin native began his Celtic career in brilliant fashion, scoring on his debut against Ross County and netted with an overhead kick in the next league game against Kilmarnock FC.

Jenz represented the youth teams of Alemannia 06 Haselhorst, SC Siemensstadt and Tennis Borussia Berlin before continuing his education at the Fulham academy in 2015.