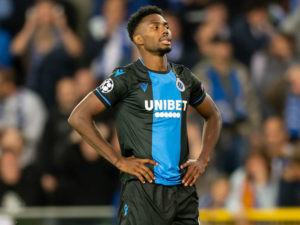 Arsenal, Everton and newly-promoted Leeds United are all in the race  for the Club Brugge forward but face competition from German Bundesliga and Italian Serie A teams.

Bayer Leverkusen, RB Leipzig and Inter Milan have also been mentioned as candidates to sign Dennis.

Manchester United were in the race for the Super Eagle Star  but reports suggest that the Red Devils have cooled their interest in the 22-year-old.

He was on target against Manchester United in the Europa League last 32 and bagged a brace in a Champions League group game against Real Madrid at the Santiago Bernabéu last season.

Club Brugge are willing to cash in on their Nigerian star this summer, provided his asking price is met by one of his suitors.

Dennis has made it clear that he wants to leave the Belgian champions before the close of the transfer window and he prefers to join a team competing in next season's Champions League.

The striker has not been involved in Club Brugge's last two league games amid speculations surrounding his future.