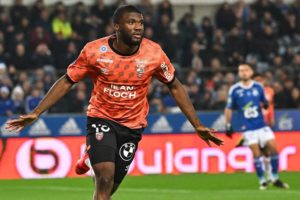 Ligue 1 side Olympique Marseille is the lastest club to be linked with Nigeria international Terem Moffi.

The Lorient striker has been a transfer target for quite a number of clubs both home and abroad.

English clubs like Southampton, Crystal Palace, Everton and West Ham United have at one point of the other made known their interest in Moffi but the Lorient insist on a €25m transfer fee.

OGC Nice last week was reported to had a verbal agreement for the 26 year-old but a transfer is yet to materialize.

However French newspaper L’Equipe, revealed that Marseille chiefs  Pablo Longoria and Javier Ribalta are working on a deal to sign the Lorient hitman and have opened talks with the player's agent, Emeka Obasi.

Marseille have made a verbal offer to Lorient - a fee similar to what is being offered by OGC Nice.

There is a possibility that Bamba Dieng could be used as makeweight in the proposed deal to bring Moffi to the Orange Vélodrome as Lorient were interested in signing the Senegal international striker last summer.