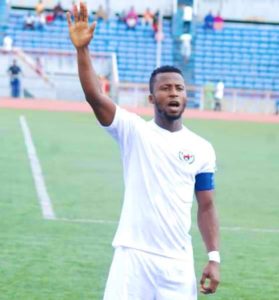 Following the withdrawal of Nigeria Professional Football League side, Enugu Rangers captain's hand band, Tope Olusesi has revealed the reason behind the action.

The CHAN Eagles captain and defender explained to Brila FM.net that he had lost the club's captaincy following "a disagreement with the management"

The defender also said the stripping off had to be done quickly in order for  the club to choose a substantive captain.

It will be recalled that at about a week ago Olusesi was replaced with Uche John to be the captain for the seven-time champions of the league giving room for speculations about the future of the Olusesi.

The right back spent 6 years with Enugu based club on Sunday penned down a farewell message confirming his departure from the club.