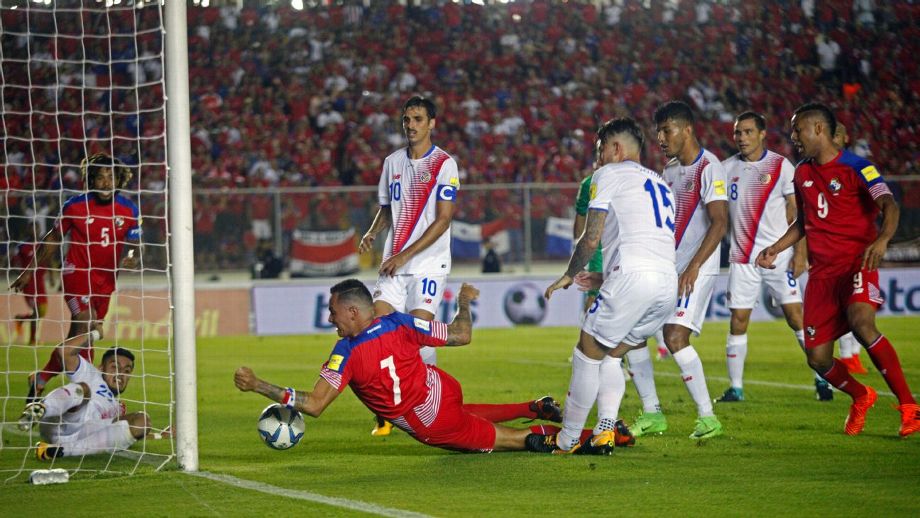 In honour of the controversial goal that sent Panama into the 2018 World Cup and helped deny the United States a trip to Russia, we ranked the 10 most memorable ghost goals.

Tottenham and Chelsea don't need an excuse to dislike each other, but if they did, this provides it. Chelsea were 1-0 up in this FA Cup semifinal when a corner came over from the right, it broke to Juan Mata, who shot at goal. A tangle of bodies, including John Terry's, blocked the ball about a yard from the line, and the ball squirted back out and into play. This was apparently enough for referee Martin Atkinson to signal a goal, much to the bafflement of all concerned. Even Terry, who said afterward, "I thought it hit me to be honest and didn't go over. But the linesman has seen it and given it. We're delighted with the win." Indeed they were: Chelsea went on to win 5-1.

Ever wondered why officials are so keen to double-check everything is OK with the goal nets before every game? Well, it's because of stuff like this. In the 68th minute of a fairly sleepy Bundesliga game between Bayer Leverkusen and Hoffenheim in October 2013, Leverkusen were 1-0 up when they won a corner. Stefan Kiessling got a header to the cross; it hit the side netting but squirmed through a hole, left unclosed by a careless linesman, and into the goal. The forward himself turned away and placed his hands on head in woe at having missed the chance, but by the time he looked around, a goal had been given. The referee even inspected the offending hole, but didn't reverse his decision. Hoffenheim attempted to get the remaining 22 minutes replayed, but to no avail: The goal stood, and Leverkusen won 2-1.

On a similar theme, back in 1970 a referee was fooled by a stanchion rather than a faulty net. Chelsea's Alan Hudson lined up a shot from outside the area; it went wide of the post but rebounded against the goal-frame metalwork in a manner that suggested it might have gone in. Referee Roy Capey awarded the goal, and despite extensive protests from Ipswich manager Bobby Robson, it stood. "The referee said it went in and that's what counts," Hudson said. "Let's say it makes up for a couple I scored that were disallowed last season."

The dispute over a couple of the goals on this list will be over whether they crossed the line. In this case, there's little doubt; it's just that it crossed about two yards outside the post. John Eustace, a Watford midfielder at the time, challenged for a corner with Reading forward Noel Hunt, it came off his thigh and went just wide of the post. Play continued for a few seconds, but linesman Nigel Bannister raised his flag and indicated a goal; referee Stuart Attwell, despite even Reading winger Stephen Hunt trying to persuade him otherwise, pointed to the centre spot. "I'd never seen anything like it," Watford manager Aidy Boothroyd said. "It was like a UFO landing, a mistake like that."

Sometimes you can see why smaller clubs think there's a conspiracy in favour of the giants. In 1994, Nurnberg were struggling against the threat of relegation when they traveled to face Bayern Munich. A corner came over from the right; Bayern's Thomas Helmer went to meet the cross but made a mess of things, at first nudging the ball toward goal before it hit the back of his own leg and squirted out. Everyone carried on as normal for a second before linesman Jorg Jablonski awarded a goal. Bayern won 2-1, but Nuremberg appealed and the game was replayed, this time without any significant refereeing errors in a 5-0 Bayern victory. At the end of the season, Nuremberg were relegated... on goal difference. At least referee Hans Joachim Osmers can laugh about it: To this day he has a picture of the incident in his office.

Jose Mourinho has won eight league titles in four different countries, two Champions Leagues and an impressive array of other hardware. But if you ask him about the 2005 Champions League semifinal, he'll probably still clench his fist in frustration. According to Luis Garcia, Mourinho is still "seething" about the goal awarded after the Liverpool forward flicked a loose ball over Carlo Cudicini and over the line at Anfield ... or perhaps not quite over the line. Still, while repeated viewings of the clip still make a definitive conclusion tricky to reach, Garcia is certain. "I celebrated the goal because I truly believe that I saw the ball go over the line," he told FourFourTwo this year. "It all happened so quickly -- but look at my movement when I hit the shot, and also as Chelsea try to clear it. It's natural because I saw what I saw, and that was the ball crossing the line."

"France were there for the taking and Ireland didn't do it. Same old story. They can complain all they want but France are going to the World Cup. Get over it." That was Roy Keane's typically forthright response to the idea that Ireland should feel aggrieved by the handball committed by Thierry Henry in the second leg of the qualifying playoffs for the 2010 World Cup. After Henry had controlled the ball with his arm and squared for William Gallas to nod home the winning goal, the striker sat on the turf with Ireland defender Richard Dunne, knowing he had done wrong. But it was the aftermath that became even more bizarre: Ireland asked to be a 33rd team at the World Cup, a request that was refused and even mocked by Sepp Blatter. Afterwards, FIFA paid the Football Association of Ireland €5 million as compensation for the "reputational damage" said mocking incurred, in the form of an "interest-free loan." The loan is yet to be repaid.

"I beat out [Peter] Shilton because I was in the best shape of my life," Diego Maradona wrote in his book "Touched By God: How We Won The Mexico '86 World Cup." A slightly generous interpretation: The Argentina star probably also beat out Shilton because the England goalkeeper wasn't quite expecting the best player in the world to punch the ball in with his hand. Even as Maradona celebrated, teammate Sergio Batista asked if he really had scored with the forbidden limb. "Shut the f--- up and keep celebrating," was Maradona's pithy response, eager that referee or linesman wouldn't belatedly penalize his cheating. "I am not sorry for scoring with my hand," Maradona wrote. "For me, it was like stealing from a thief: It's no crime in my opinion."

With England and Germany in extra-time of the 1966 World Cup final, Geoff Hurst received the ball in the German penalty area and hammered it against the crossbar, from where it bounced down on the goal line and out again. On the goal line, and out again. Linesman Tofiq Bakhramov gave the goal, but going on his later recollections, he didn't exactly present the most watertight case. "I didn't see the ball in the goal," he said, "but I saw how the Englishman [Roger] Hunt raised his arms in the air. I also saw that the German goalkeeper gave the impression of being inconsolable. Therefore, it must have been a goal." Flawless logic. Of England's only World Cup trophy to date, captain Bobby Moore later admitted, "We won the World Cup on the best appeal of all time."