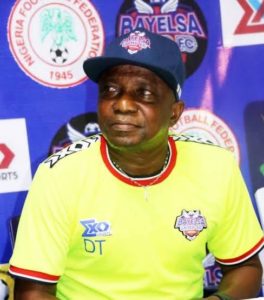 Bayelsa United Manager, Diepreye Teibowei, believes his team will not just make up the numbers in the Nigeria Professional Football League.

Teibowei has stressed that his team will see some incomings before the transfer window ends.

Bayelsa United make a return to the Premier division of Nigerian football League after seven years in the lower division.

Coach Teibowei, when asked about the preparation of the team ahead of the new NPFL season said, they will not fold their arms while every other team prepares for the new season.

The Coach disclosed that the team has been training well and will be involved in pre-season tournaments with the present crop of players in the team.

With the transfer window expected to shut at the end of the month, Teibowei maintains that some players have been recommended, and that they are being assessed to possibly get business done at the end of the day.