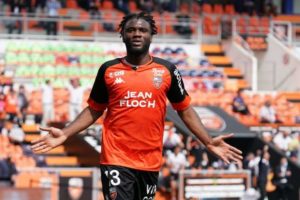 Super Eagles striker Terem Moffi has been included in the Ligue 1 Team of the Week, after scoring and providing an assist in Lorient’s 2-1 win against Lille on Friday.

The Team of the Week which is for the fifth round of fixtures in Ligue 1, was released by French daily newspaper L’Equipe on their verified Twitter handle on Monday.

Also in the Team of the Week are PSG stars Maquinhos, Achraf Hakimi and former Manchester United midfielder Ander Herrera.

Moffi was the standout performer for his side after setting up teammate Armand Lauriente for the opener in the seventh minute before scoring the winner with three minutes left.

Moffi now has two goals and two assists in five games in the French topflight this season.