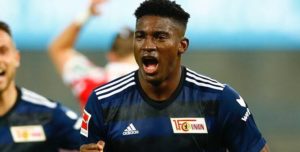 Taiwo Awoniyi scored his third goal in three Bundesliga games to power Union Berlin to a commanding 2-1 victory over Borussia Moenchengladbach at the Alte Foersterei on Sunday afternoon.

Niko Gießelmann’s header from a Genki Haraguchi free-kick gave the hosts the lead against the run of play midway through the first half.

Moenchengladbach hoarded a significant portion of the possession, but with an in-form Awoniyi, Union Berlin always posed a danger on the counter.

And the former Liverpool man should have doubled Union Berlin’s lead in the 34th minute, but he could only direct his shot to the centre of the goal, making it easy for the keeper to make the save.

Awoniyi, however, made no mistake seven minutes later when he pounced on a Max Kruse defense-splitting through ball to beat the goalkeeper with a low shot.

Union Berlin kept their shape after the break, limiting the visitors to half chances before Awoniyi was replaced by Kevin Behrens with a quarter of the game left to play.

Despite his fine performances for the Iron Ones in Europe and the domestic scene, Awoniyi was omitted from the 30-man Nigerian squad preparing for the Qatar 2022 World Cup qualifying matches in September.

The 24-year-old would, however, hope that Super Eagles head coach Gernot Rohr is paying attention to his brilliant performances in one of the best leagues in the world.