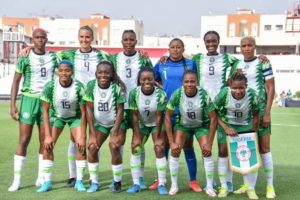 The Super Falcons of Nigeria will battle the Nadeshiko Japan, the women's national team of Japan, on October 6th, 2022 by 8:25am GMT+1.

This match up will serve as warm-up for both teams ahead of next year’s FIFA Women’s World Cup in Australia and New Zealand.

Barcelona star, Asisat Oshoala has been recalled by Randy Waldrum to the Super Falcons squad ahead of the clash next month.

The former Arsenal striker has been absent in recent Super Falcons games due to injury.

Falconets trio of Tosin Demehin and Rofiat Imuran, Deborah Abiodun, who all featured at the recent U20 World Cup in Costa Rica were also called up by the American Gaffer.

They are the most successful women's national team from the Asian Football Confederation. The highest ranking in the FIFA Women's World Rankings achieved by the team is 3rd, during the December 2011 rankings.

They won silver medals at the 2012 Summer Olympics and the 2015 FIFA Women's World Cup, making them the only Asian team to have three combined medals from international championships.

This would be the fourth meeting between the Super Falcons of Nigeria and Nadeshiko Japan.

Both teams have clashed only once at competitive level – at the 2004 Olympic Women’s Football Tournament. Nadeshiko pipped the Falcons 1-0 at the Karaiskakis Stadium in Piraeus on 14th August 2004.

The other two times the duo met was during two back-to-back International friendlies in 2013 which the Nadeshiko won 2-0.

The Super Falcons will be looking for their first win against the Asian giants when they clash next month.