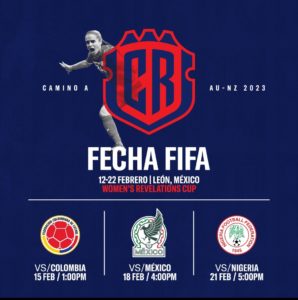 The women senior national of Nigeria, Super Falcons has been listed among the counties taking part in the four-nation tournament scheduled for next month, Nigeriasoccernet.com gathered.

Super Falcons, in preparation for the Women World Cup coming up in July in New Zealand and Australia will play the host (Mexico), Columbia and Costa Rica with the last two counties playing at the mundial as well.

The tournament tagged Revelations Cup Mexico will be played in Leon from February 12 to 22.

The Super Falcons will face Colombia in their first game on Wednesday, February 15.

They will face hosts Mexico on Saturday, Febuary 18 and Costa Rica on Tuesday, Feburary 21, 2023.