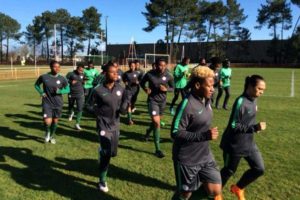 Nigeria will face Gambia in the second round of Ghana 2018 African Women’s Cup of Nations qualifiers.

Champions Super Falcons were given a first round bye alongside Equatorial Guinea, South Africa and Cameroon.

Falcons opponent Gambia lost 2-1 to Burkina Faso in their first leg encounter at the 4 Août Stadium, Ouagadougou on 7th of April. A 2-1 win by the Gambians in Bakau on Tuesday, forced the game to penalties where they won 5-3 on aggregate.

Gambia and the Super Falcons will face each other in June.

Meanwhile, 2016 AWCON runners-up Cameroon will take on Congo who defeated Central African Republic 3-1 on aggregate in the first round.

The seven winners of the second round will join hosts Ghana in the final tournament scheduled for 17 November to 1 December 2018.

The three top nations in the continental competition will qualify for the 2019 World Cup in France.