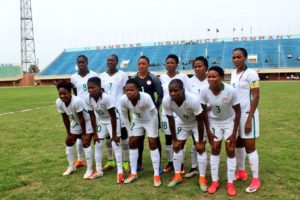 The Super Falcons gave their qualification to the 2018 Africa Women’s Cup of Nations (AWCON) a big boost following a 1-0 away win against Gambia in the first leg of their final qualifying tie at the Independence Stadium, Bakau on Wednesday.

Amarachi Okonkwo was the hero for the Super Falcons as her first-half strike sealed the win for the reigning African champions.

The return leg comes up on Monday, June 11 in Lagos with the winner over the two legs between the Super Falcons and Gambia qualifying for the 2018 AWCON in Ghana.

The Super Falcons almost had the perfect start as early as the fourth minute through Desire Oparanozie but she failed to hit her shot properly off a goalmouth scramble.

Four minutes later Gambia had a chance of their own only for Penda Bah to head wide from a brilliant cross.

In the 12th minute, Francisca Ordega went close following a header from Asisat Oshoala only to see her effort go inches wide.

The Super Falcons eventually took the lead in the 19th minute through Okonkwo whose shot from nearly 25 yards beat the Gambian goalkeeper.

With less than 10 minutes remaining, Ordega had a chance to double the Super Falcons’ lead but failed to put away a begging chance in front of goal.

In the 57th minute, Anam Imo went close to extending the Super Falcons lead after connecting with Oshoala’s cross which the Gambian keeper stopped from going in.

With 20 minutes left, Imo thought she had doubled the Falcons’ lead after tapping in Oshoala’s cross but she was ruled out for offside.

The Super Falcons made a double substitution in the 71st minute with Ngozi Okobi and Chinaza Uchendu replacing Oshoala and Imo respectively.

Despite the changes, the Super Falcons could not add to their solitary first half goal as the Gambian remained resolute not to concede another goal.