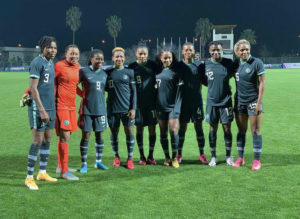 The Nigeria women's national team will take on reigning world champions, the United States of America in an invitational tournament in Texas this summer.

The four-nation women's competition, tagged the Summer Series, is scheduled to be held from June 10 to 16 and will also feature European giants Portugal and Caribbean side Jamaica.

Back in 2015, Abby Wambach's strike was all Jill Ellis’ side required to subdue 10-player Super Falcons and they are now set to meet at international level for the sixth time in history.

However, after winning the Turkish Women's Cup in February, with Randy Waldrum looking to build on his positive start in charge as they gear up for the Africa Women's Cup of Nations qualifiers.

Despite the lined up invitationals, including the Basque event, Waldrum's side failed to regroup in the international break in April but they will now be eager to continue from where they left off in Texas.

The Super Falcons begin with a match against Jamaica on June 10 in Houston, followed by a meeting with Portugal on June 13 also at BBVA Stadium.

The Falcons will travel to Austin to face the US on June 16 in the first-ever football match at the new 25,000 seater Q2 Stadium, the home of new Major League Soccer outfit, Austin FC.

Commenting on the schedule, Nigeria’s head coach Waldrum is excited about the opportunity of facing off with three nations in the build-up to the 2022 Awcon qualifiers.

“The Summer Series is an interesting event and the teams featuring are of very high quality," said the Trinidad and Tobago manager.

"It is a great prospect for us as we continue to build ahead of the qualifying games for next year’s Women's Africa Cup of Nations.”