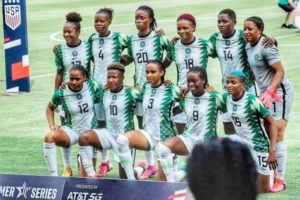 Earlier, foreign-based Falcons players especially those who are resident in U.S left the team’s Fairmont Hotel in Austin a day after Nigeria lost 2-0 to USWNT in the Summer Series finale on Wednesday night which was 2 am in Nigeria.

Also, the Europe-based players left Texas for Amsterdam, Holland on Thursday with the rest of the Nigerian delegation, from where they connected their flights back to Spain and Belarus.

Super Falcons Head Coach, Randy Waldrum who did not have the full compliment of the experienced players due to injuries and logistics challenges was forced to scavenge for willing foreign-based players with Nigerian origin to make up for the shortfall.