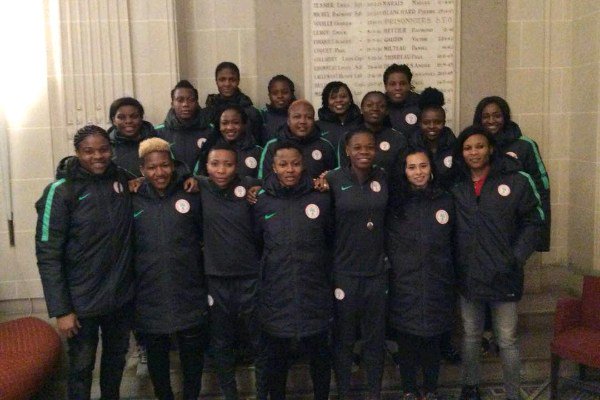 Holland-based Sophia Omodiji, Cyprus-based Ngozi Ebere as well as the home-based players invited to the Super Falcons squad have joined their team mates at the Mecure Hotel base for Friday’s friendly game against France in Le Mans.

The players arrived on Wednesday night to complete the squad of 18 players invited by coach Thomas Dennerby for the high-profile friendly.

The Super Falcons twitter handle also revealed that the team will be having two training sessions before the game tomorrow.

The Super falcons first training session will come up by 10am France time at the Le Clos Fleuri ground while the second session will take place at MmArena by 6pm on Thursday.

“With the arrival of Holland-based Sophia Omidiji @vegas2nl and Cyprus-based Ngozi Ebere, we now have a full house of 18 players in camp at the Mecure Hotel ahead of Friday’s friendly against France WNT @equipedefrance in Le Mans. #SoarSuperFalcons #FRANGA #SuperFalcons,” the Super Falcons account tweeted on Wednesday night.

“With all invited players in camp, we will have two training sessions on Thursday before Friday’s friendly with France WNT in Le Mans. Our first training will come up by 10am at the Le Clos Fleuri ground and the second session will hold at MmArena by 6pm. #FRANGA #SoarSuperFalcons.”

The friendly will take place at the Stade MMArena on Friday.