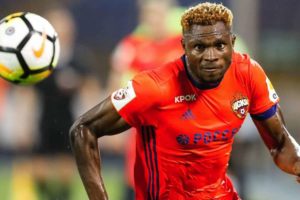 He scored four goals and an assist in 10 appearances.

He has previously played in Norway and Russia.