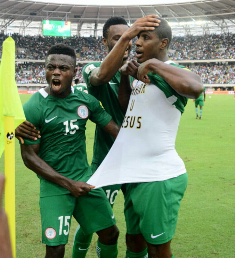 Christian Gourcuff will be without star striker Kalifa Coulibaly when the Canaries travel to the capital to face the champions but the French manager is banking on Nigeria international Simon Moses to lead Nantes to shock Thomas Tuchel’s side.

Super Eagles winger Simon Moses will likely start as a striker when Nantes visit the home of PSG on Tuesday night after striker Kalifa Coulibaly was ruled out of the encounter.

The champions are an unstoppable train at the Parc des Princes where they have won eight of their nine home matches in all competitions this season, scoring 22 and conceding just twice.

But in Moses Simon, Nantes can call on a winger who retains an eye for goal. The 24-year-old, on loan from La Liga side Levante, has scored 5 goals and supplied 2 assists in 20 appearances, including a fine assist in last weekend’s 2-1 victory over bottom club Toulouse.

Nantes coach Christian Gourcuff is convinced Moses Simon can inspire his men, in the absence of their top striker Coulibaly, to hurt the champions.

“We can play without a center-forward, or at least with a player with a different profile,” Gourcuff told Nantes official siteas observed.

“We have Moses (Simon), Kader (Bamba), both of who are offensive players with speed and the ability to take on defensive players.

“On the individual level, if these two players (Moses and Kader) have a good match, then there is always a chance (to beat PSG).

“The desire is that they become even more proactive in their positioning and that they use their strengths. Moses (Simon), seems to have found his rhythm in the last two games. After a slow start Kader (Bamba), is a player who is discovering the Ligue 1 and is presently in an interesting form.

“For the club, it’s great that these players reveal their true selves.”